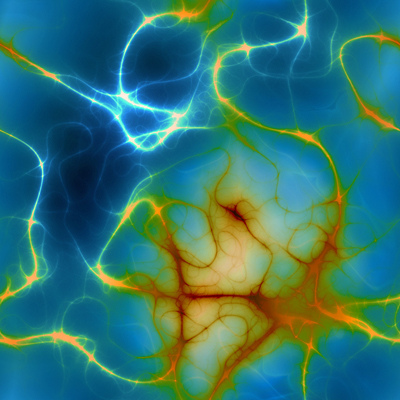 The dendrites of a neuron are the many branch-like extensions that emerge from the cell body. These branches allow the neuron to receive connections from other neurons. Nerve cells communicate by electro-chemical signals that are transmitted into the dendrites. Each different type of nerve cell has a unique pattern of dendrite growth and any one neuron can receive multiple connections from many other nerve cells.

The axon is an extension from the body of a nerve cell. While a single neuron can have many dendrites, each cell has only one axon. Axons vary quite a bit in length: the smallest are almost imperceptible while the longest run most of the length of your body. Most axons branch out into several terminals toward their end. The job of the axon is to transmit signals from the neuron to other cells. This may be through a motor neuron that activates a muscle or it may be a sensory neuron telling you that someone is tickling your foot.

Your spinal cord is largely made up of a giant bundle of nerve axons that connect your brain to the rest of your body. This is why people with broken backs or necks usually can’t feel or move anything below the break: the nerves connecting those parts of the body to the brain have been severed.

A special layer of fat, called myelin, develops along the axons of nerve cells. The myelin accelerates the speed at which a nerve signal travels along a cell. Unfortunately, there is a limit to how much myelin you can develop on any given nerve axon, but a nerve that is fully loaded with myelin can transmit its signal 100 times faster than a minimally myelinated nerve cell.

Myelin develops along a nerve axon in direct response to the use of that nerve: The more you activate that particular nerve, the more myelin it will develop. Much of brain development, particularly in adolescence and early adulthood, has to do with the growth of myelin on nerve axons. Myelin makes up the “white matter’ of the brain.