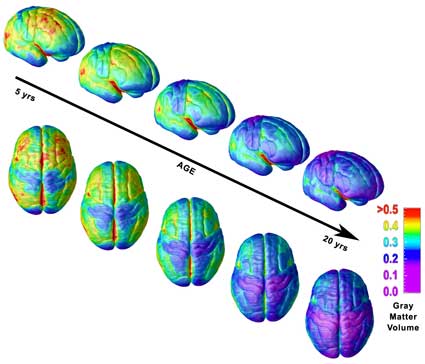 Physical Growth of the Brain

In utero, the brain develops from a tubelike structure of cells. Over the course of pregnancy, this tube grows very rapidly, twisting and turning in on itself to become the baby’s brain and spinal cord. By birth, a newborn’s brain closely resembles that of an adult, but it is much smaller, only about one quarter the size. Over the course of the first few years of the child’s life, the brain will grow rapidly, reaching 80 percent of adult size by age three and 90 percent of adult size by age five.

Remember that the physical growth of the brain is only half the story: just as important is the growth of connections between different parts of the brain and between the brain and the body. These connections develop and strengthen throughout life, so while a five-year-old’s brain looks a lot like an adult brain, it only functions at a small fraction of the speed.

The brain develops from the bottom up and from the back to the front. This pattern closely mirrors the evolution of the brain, as the more primitive structures that control the autonomic functions of the body (things we do automatically and without thought such as breathing, the beating of the heart, and the release of different hormones) develop first. These are then followed by the development of structures associated with memory and emotion, then motor function (movement and physical control) and language. The last parts of the brain to develop are those associated with conscious thought. Each of these structures is reviewed later in more detail, but for now what is important is to be aware of the pattern of development.